Essex-based DJ Fraser Transport has been trading for nearly 20 years, operating a successful low loader/bulk transport business alongside a working farm. Owner, Duncan Fraser, was looking to replace one of his four vehicles to become LEZ compliant and in the end was persuaded to buy two, the deal was so good.

"I operate a small fleet of Scanias on tramping work through the UK. Initially I had planned to replace one of the trucks. I came across Secondhandtrucks.co.uk in a web search on the Internet. After seeing the trucks, I bought two 480 bhp '56 Plate Scania Toplines fitted with A frames and tipping gear and they were presented in my livery, in mint condition.

In all my years of buying trucks, this was by far the easiest purchase I have made and I can't praise Matt and his team enough. Whatever I asked for wasn't a problem and they even delivered the trucks to my door. You can see the trucks for yourself at Truckfest in Peterborough." 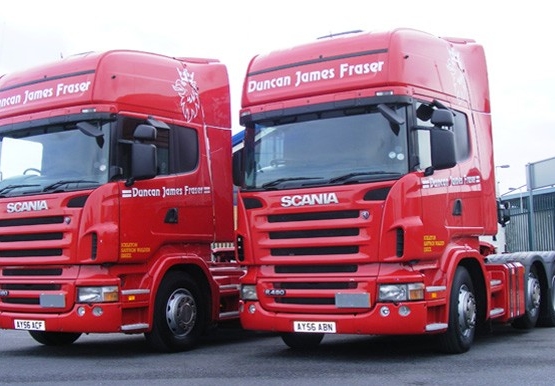 "Secondhandtrucks made our experience effortless and we'll definitely be back to buy more in the future..."